“Begin by creating a new host application to host the target. Run Virtuoso by clicking the Virtuoso symbol on the desktop, and you will see the Virtuoso Project Browser. Select the New Project tab, select the Visual Studio version you prefer, then specify the folder and host name. We will create a “Hello World” host project on the desktop. Click “Create Project” and your Virtuoso host, with corresponding C# application, will be created.” 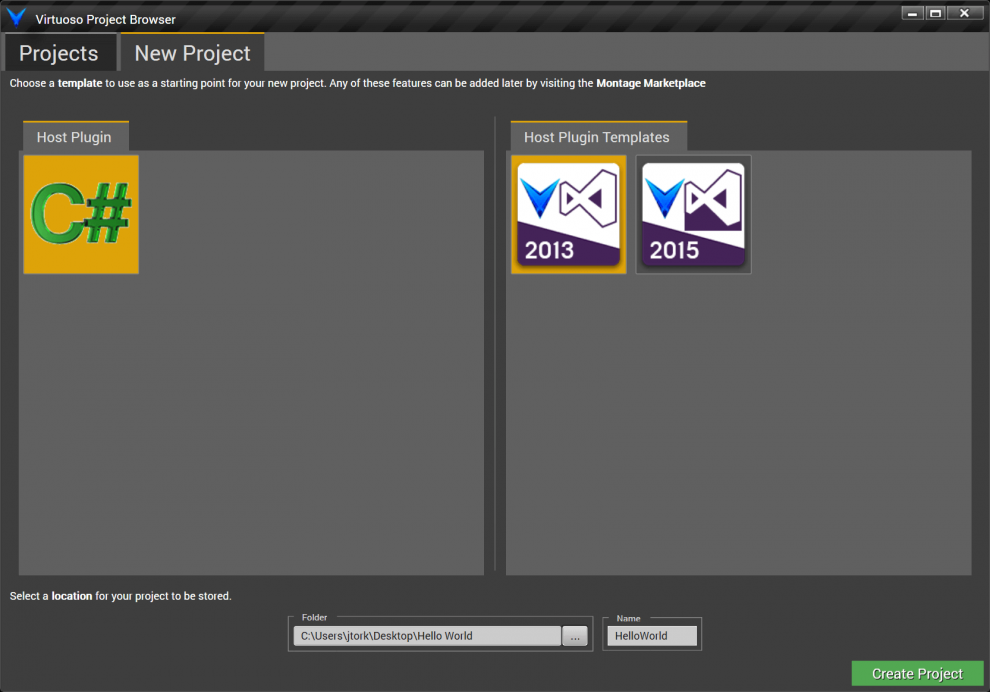 After your host is created, you will see your empty host schematic for the HelloWorld host as shown below. 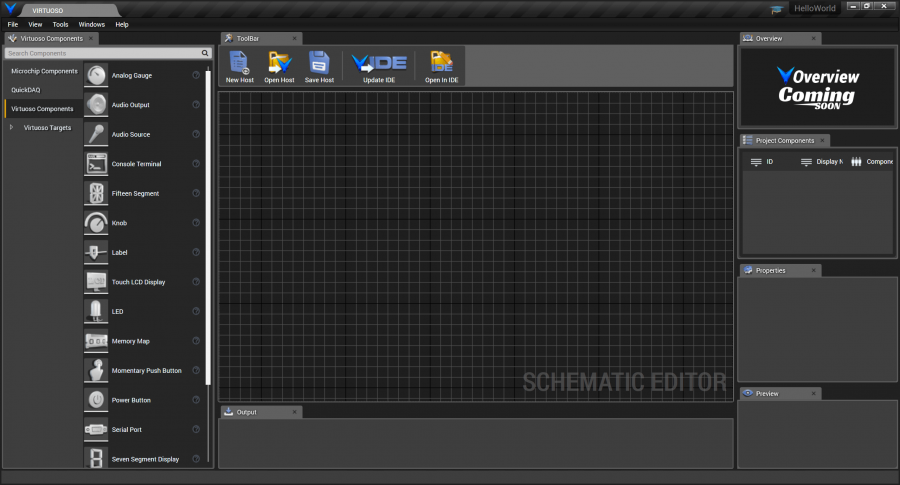 Click on the “Open In IDE” button to open the host in Visual Studio. You will see your C# “HelloWorld” project, a completely normal C# MVVM desktop application. 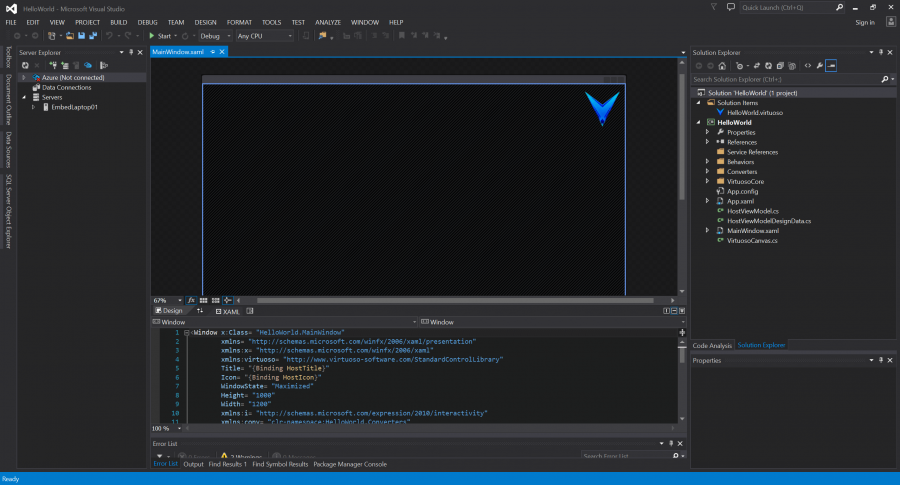 With Visual Studio still open, go back to the schematic editor. Select the Virtuoso Targets component group and you will see your available target templates. These options might look different for you depending on which target template Montage packages you have installed in your vault. Add an empty target by dragging and dropping the VS2013 Empty Target onto the schematic as shown below. 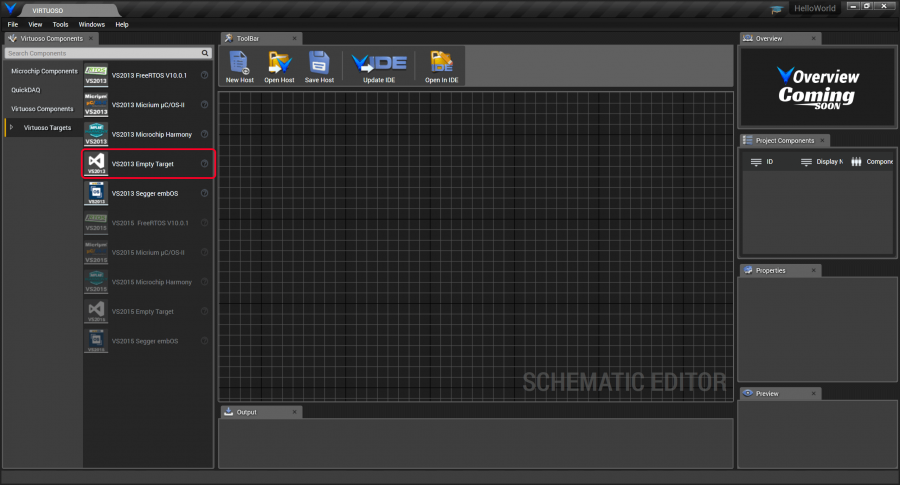 After dragging and dropping, you will be prompted to specify the name of the target. Give it the name “HelloTarget” as shown below and click “Create Target”. 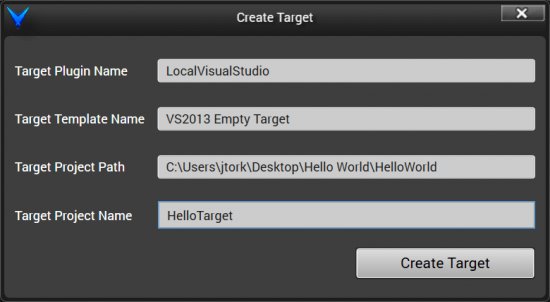 The target will be represented on the schematic as a component as shown below, initially with only the default power ports. 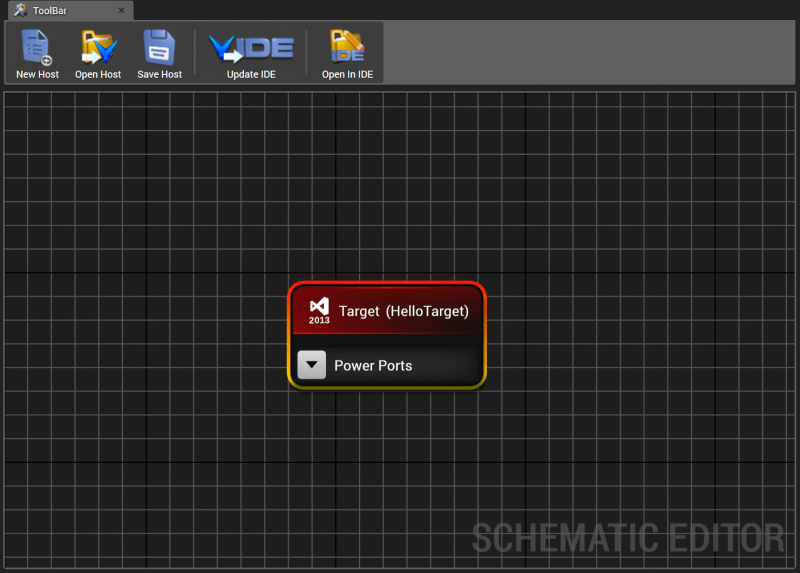 Click the “Open In IDE” button again to pull up the Visual Studio Solution. In the solution explorer window, you will see a “HelloWorld” C# project (green) and a “HelloTarget” C++ project (purple), as shown below. Click Build->Build Solution to verify that both projects in the solution build successfully. 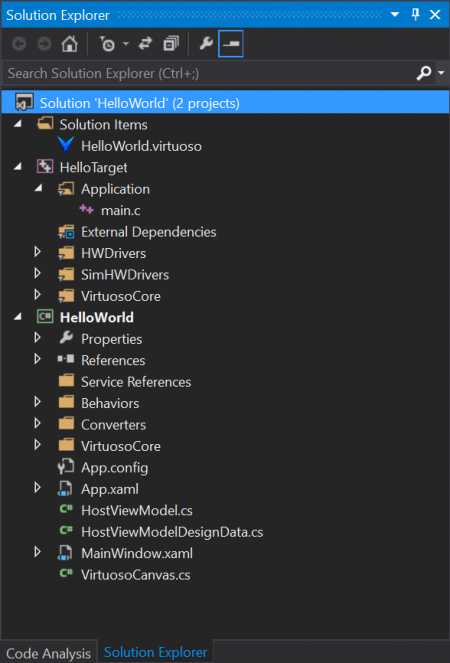 In the C# project, expand the “VirtuosoCore” folder and note the “HelloTargetModel.cs” file. This is the runtime model class for the target, and was generated along with the C++ “Target” project when you created the target. If you had named the target “MyCoolApp”, then you would instead see “MyCoolAppModel.cs” and a C++ project named “MyCoolApp”.

Open the HelloTargetModel.cs file and notice that it has constructors, a few fields, and a bool property named “PowerInput”.

With this file still open, now expand the “Application” folder in the Target project, and open main.c. Above the main function, declare the statically linked MyInt and MyFloat variables as an ‘int’ and a ‘float’, respectively, as shown below. 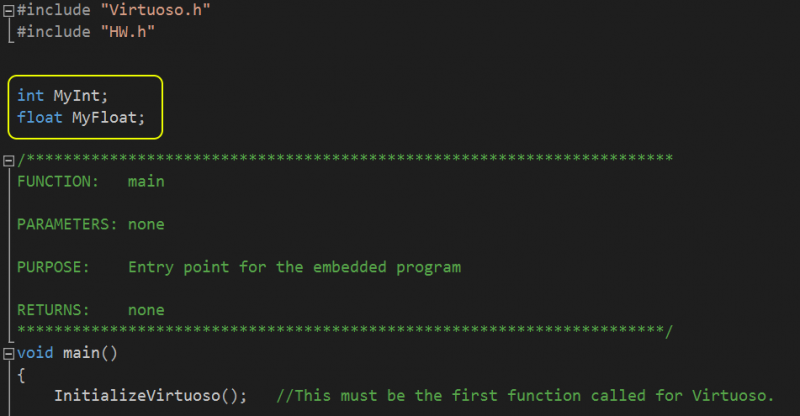 Now select Build->Build Solution from the menu or press F6 to build the solution. In the Output window you will see that one project built successfully (the C# project didn’t need to be rebuilt because it didn’t change), and you may get a message notification as shown below informing you that the file inside this editor was changed externally. This is because you have the HelloTargetModel.cs file open, and when you rebuilt the Target project, Virtuoso rewrote this HelloTargetModel.cs file. Thus, any changes made to HelloTargetModel.cs will be overwritten by Virtuoso, and you shouldn’t make any changes to this file. Click Yes or Yes to All to continue.

Select the TargetModel.cs file in the window tab, and you will note that while the TargetModel.cs file was re-rendered, it is the same as it was before. This is because we haven’t selected any C variables to be exposed on the target model. We will do so now. In the “Solution Items” folder in the Solution Explorer window, double-click on the target file, “Target.virtuosotarget”. This will open up the Target Model Builder for this target, as shown below. 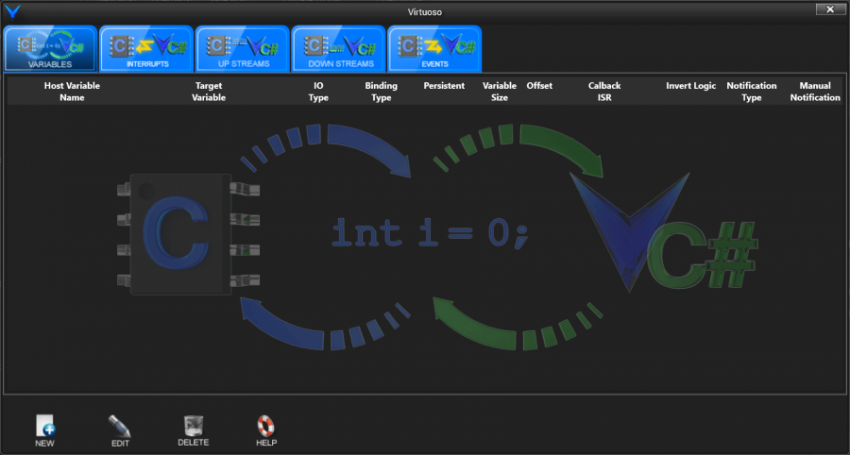 The tab that is selected by default is the “Variables” tab, and this is the one we’re interested in. Click the “New” icon in the lower left corner of the Target Model Builder window, or right click in the table area and click “New” in the context menu, as shown below. 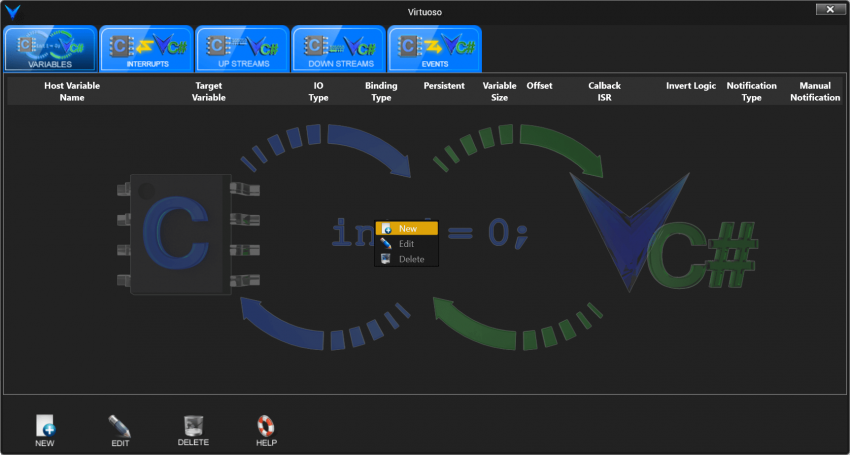 This opens up the “Create New Variable” window, where we can create a new variable binding between the host and the target. In the “Target Variable” textbox, start typing “My” and you will see the two statically linked variables we declared, MyInt and MyFloat, as filtered options. 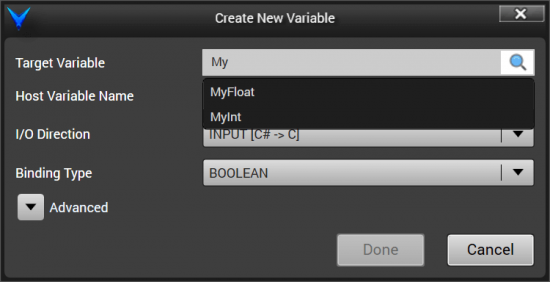 Select MyInt. The “Host Variable Name” field will be filled in with “MyInt” by default, and generally you will want to use the same name. This is the name of the variable that will be rendered on the Target Model C# class to represent this variable in C#. The I/O Type specifies whether we want this variable binding to be an INPUT (the C# property will be written to, and the value will be updated in the C target), an OUTPUT (any time the variable is written to in C, the C# property will be automatically updated), or BIDIRECTIONAL (the variable can be written to from either C or C#, and the change will be reflected in the other). Leave this variable as an INPUT. The Binding Type indicates what variable type the C target variable will be presented as in the C# Target Model. Change this to INT32 and click “Done”. 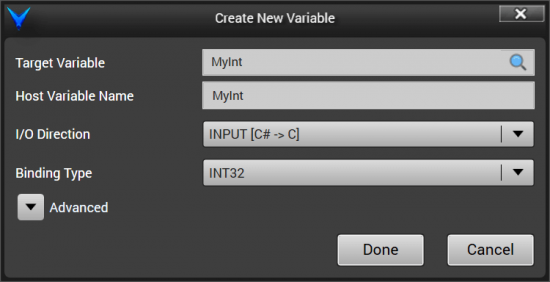 You will now see this variable binding in the Variables binding list, as shown below. 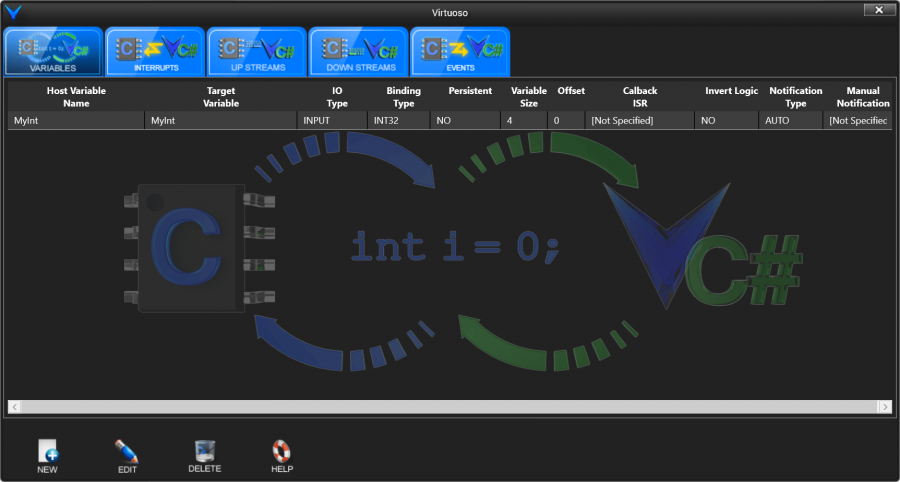 Click “New” again to create another new variable binding and select MyFloat as an OUTPUT with a FLOAT binding type, as shown below, and click “Done”. 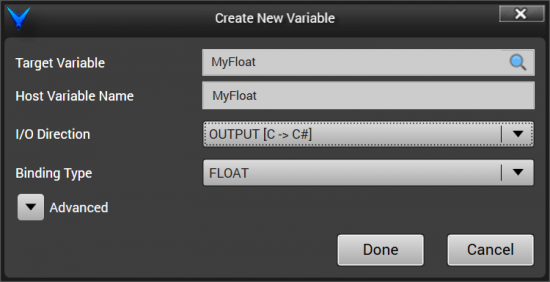 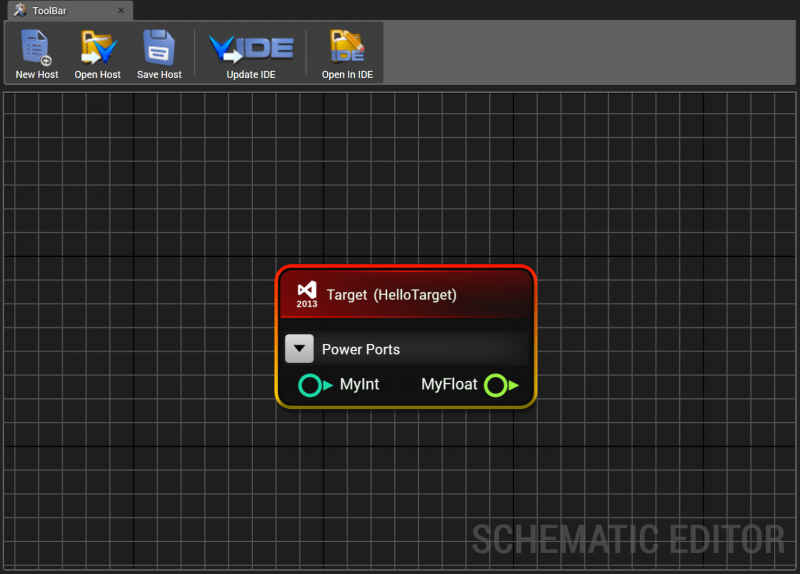 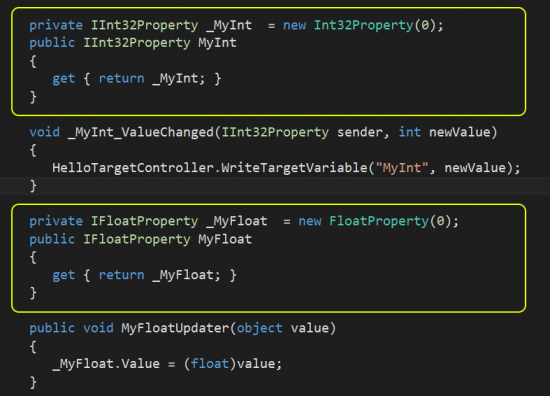 We have now successfully created a C# host project and a hosted C/C++ target project and configured variable bindings for statically linked properties. The project can be built and run, although it doesn’t do anything exciting quite yet. But as we will see, this will be one of the foundational functionalities that make the composition of virtual devices very easy.